Aguero release clause may be reduced 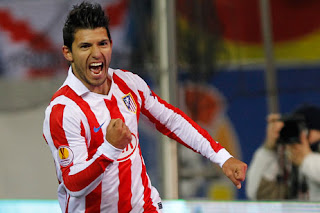 Sergio Aguero, who is desperate to leave Madrid following another dismal season, has a current release clause of £42 million, a price which has scared off many potential suitors. Chelsea are monitoring developments with the Argentine international after his advisers held talks with Atletico Madrid in an attempt to get his release clause reduced from £42m to £32m. Chelsea, who made an enquiry for the Argentinian in January, remain interested despite strong interest from Juventus and Atletico's fierce rivals Real Madrid. Aguero announced his plans to leave Athletico via twitter last month and since the likes of Manchester City and Real Madrid have been linked with his signature, but only Chelsea's interest has been sustained. Meanwhile, Chelsea and Manchester City have not lodged £40m bids for Neymar despite hints to the contrary from Santos president Luis Alvaro de Oliveira Ribeiro. Only Real Madrid have matched the asking price for the Brazilian teenager at this stage.
Email ThisBlogThis!Share to TwitterShare to FacebookShare to Pinterest