Silverware at last for Chelsea! 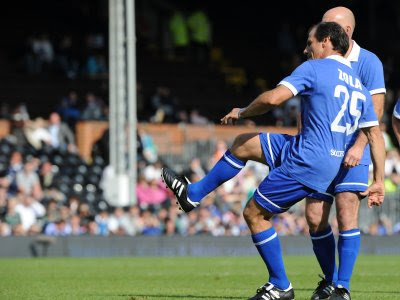 It was a blue Sunday afternoon in West London, as Chelsea 'old boys' defeated a lucklustre Tottenham to win the Sahara GCC London Legends Cup final at Craven Cottage and secure some silverware this season, at last. Tommy Docherty's men managed nine goals across the afternoon - tripling the combined total from the other contenders which also included Arsenal and Fulham. Although it was never really going to be any other way as the Blues line-up, captained by a still magical Gianfranco Zola, included Jimmy Floyd Hasselbaink, Tore Andre Flo, Jody Morris, Michael Duberry, Pat Nevin, Kerry Dixon, Clive Walker and many more.

In the first match, Fulham were all but destroyed by a Hasslebaink hat-trick and a really quite superb brace from Pat Nevin, showing that he's still got it. It could have been six had it not been for a disappointing Flo penalty saved by Fulham's keeper. Chelsea did concede a penalty themselves and Dave Beasant couldn't quite manage to repeat the stop by his opposite number. Result 5-1.

The final itself was a truly one-sided affair even if Tottenham did have some pretty decent possession, with the likes of Ramon Vega, Micky Hazard, Darren Anderton and Justin Edinburgh putting on a good show. Chelsea were fitter and quicker and Ken Monkou showed it, scoring with a half volley. It would have been an injustice had Zola (Chelsea's all time favourite player) not scored but when the Blues got a free-kick just outside the box the crowd demanded that the Italian magician should have a go. He didn't disappoint. Curling the ball over the wall and dipping so sharply it was almost at ground level when it went over the line. Flo followed scored and Jody Morris cracked in 20-yarder to underline the supremacy of the Chelsea side. Result 4-0. FULL REPORT
Email ThisBlogThis!Share to TwitterShare to FacebookShare to Pinterest