Drogba and Anelka - the 'stay or go' conundrum 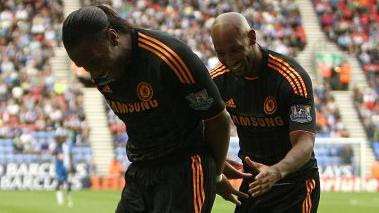 Chelsea supremo Roman Abramovich wants to keep Didier Drogba – but Nicolas Anelka faces the Stamford Bridge exit. The Blues’ Russian ruler is fielding interest in veteran hitman Drogba personally in the absence of either a manager or director of football at the club – but his preference is to keep the long-serving star. Turkish giants Galatasaray are interested in Drogba and will offer him a lucrative final pay-day, while Tottenham chief Harry Redknapp is also keen if the deal is right. But the word from the top at Chelsea is that Drogba will be kept on Abramovich’s orders – so the next coach will have to work out how the Ivorian and Fernando Torres can play together.

French star Anelka looks to be the dressing-room fall-guy for the club’s failure to land a trophy in the past season and will be sold if the right bid comes in. Anelka has had a successful spell at Chelsea, but his days as a first-choice striker are over. Abramovich knows there are some big issues to be solved in his side’s attack for next season following the record capture of Torres. England Under-21 ace Daniel Sturridge also needs to know where he stands, with Bolton already in talks about taking him back for a second spell on loan.

Chelsea hope to have a boss installed in the next 10 days – with Guus Hiddink the main target and Redknapp the alternative – and there is also the question of bids for Sergio Aguero and Brazilian Neymar to be put to bed.
Email ThisBlogThis!Share to TwitterShare to FacebookShare to Pinterest