Chelsea to fight with Man Utd for Modric 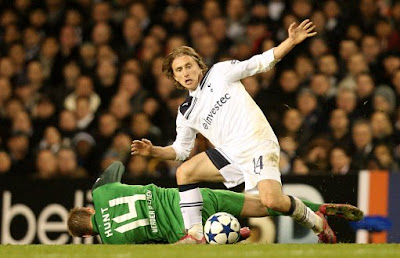 Manchester United and Chelsea look to lure Tottenham midfielder Luka Modric by tripling his pay to £130,000 per week – reports say the Spurs man wants Champions League football again after this year’s experience and could see massive pay rise by moving to one of the top two Premier League clubs. Manchester United and Chelsea are reportedly ready to offer a staggering triple pay rise to star midfielder Luka Modric to entice the player to leave Tottenham in the summer. The 25-year-old, who would attract a transfer fee of around £30million, is currently on a £45,000 a week deal at White Hart Lane. However, the Croatian could bump his wage up to at least £130,000 a week if he joins either Chelsea or United and would also have the opportunity of playing in the prestigious Champions League again.
Email ThisBlogThis!Share to TwitterShare to FacebookShare to Pinterest