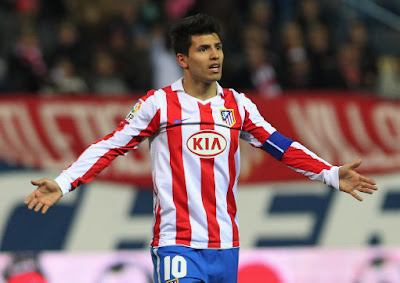 Manchester City and Chelsea are set for a £42million battle over Atletico Madrid striker Sergio Aguero after the star told his club he is leaving. The 22-year-old has been in incredible form this season, scoring 28 goals in 38 appearances in all competitions. But after five years at the Estadio Vicente Calderón, the Argentine international told the club’s hierarchy he would be leaving. Aguero revealed on Twitter and his official website that that he has asked the club to consider offers. The star said he wanted to leave last summer last summer but was convinced to stay for the fans he adores and is not leaving for financial reasons.
Email ThisBlogThis!Share to TwitterShare to FacebookShare to Pinterest